In this application the performance of the system was evaluated in the analysis of high-molecular weight compounds, namely pesticides. For such a scope, a wide mass range was applied (50-440 m/z) and an in-sample SPME-GCxGC-quadMS method was developed, then validated, for the analysis of 28 drinking-water pesticides. Chromatographic conditions were optimized by tuning the operational parameters in the analysis of a standard solution at the 50 μg/L level. The head pressure generated gas linear velocities of circa 20 cm/s and 215 cm/s in the first and second dimension, respectively. The negative offset (10°C) used in the second dimension enabled a more homogeneous occupation of the 2D space. A TIC SPME-GCxGC-quadMS chromatogram is illustrated in Figure 2.1. Peak identification was achieved by using a dedicated MS Pesticide library, characterized by the presence of LRI data used to filter out incorrect matches. 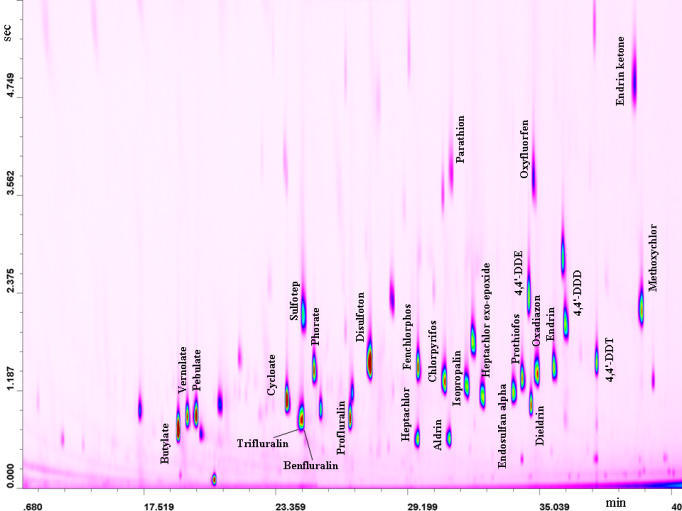 Figure 2.1 TIC SPME-GCxGC-quadMS chromatogram of a pesticide standard solution at the 10 ppb level. Refer to Table 1 for peak assignment.

The GC-MS and GCxGC-MS softwares used enable the application of a twin-filter: (i) spectral similarity and (ii) LRI range. The primary filter eliminates matches with a spectral similarity (expressed in %) lower than a minimum value set by the analyst (90% in this case); the other filter eliminates library spectra, characterized by an LRI value outside a predefined range (±20 in this case), and with respect to the LRI value of the unknown pesticide. The LRI range was determined by analyzing first the C7–C30 alkane mixture and then the 28 pesticides.
An example of the validity of using a double filtered search, in a GCxGC-quadMS analysis, is shown in Figure 2.2: with only the % similarity filter, the database search generated acceptable matches for vernolate and pebulate, eliminating butylate. The application of the LRI filter greatly simplified the search procedure, eliminating pebulate from the "hit" list, leaving only the correct match (vernolate). 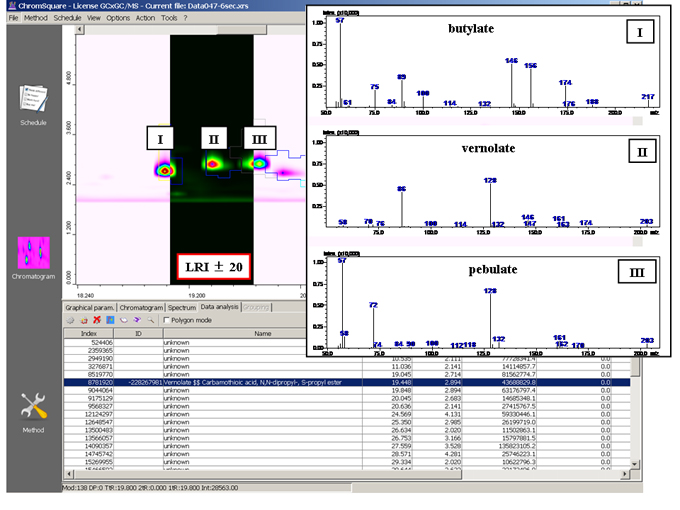 Apart from retention time precision, a series of parameters regarding SPME-GCxGC-quadMS method validation were considered (Table 2.1): the calibration curves, estimated using the least squares method, for the 28 pesticides were linear up to 100 mg/L for 21 pesticides, whereas eight were linear up to 50 mg/L. The lack of linearity in the latter cases was clearly due to two factors, namely, analytes competition and fiber saturation. In general, LOQ values were distributed over a rather wide concentration range (0.003–0.084 mg/L). Peak area precision (n=5) was measured for each pesticide at 10 mg/L: CV% values were slightly high, generally in the range of 5–15% and were due to the fact that the SPME process was carried out manually. Accuracy (n=5) was also determined for each pesticide at the 10 mg/L level: relative % error values were acceptable, namely within the range -11.3 to +12.7%. 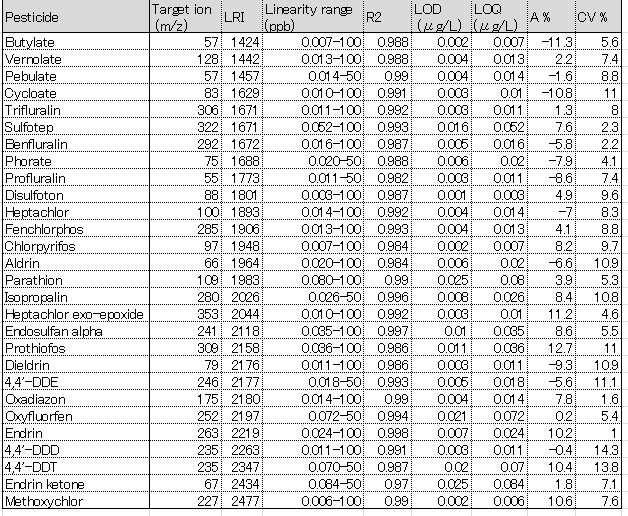 Table 2.1 With regard to the MS parameters a scan frequency of 33 Hz was applied with a scan speed of 20 000 amu/s and a mass range of m/z 50–450, to embrace all the MW values of the pesticides analyzed. The consistency of mass spectra profiles across the upper peak half was evaluated by measuring ratios for significant ions relative to 6 pesticides; CV% were lower than 15% (Table 2.2). The narrowest peak in the chromatogram was heptachlor (base width (4σ) of circa 300 msec) and it was re-constructed with 10 data points. A series of parameters regarding SPME-GCxGC-quadMS method validation were considered and are reported in Table 2.1 and 2.2.

Mineral oil products derive from crude oil, through distillation processes and various refining steps, and contain proportions of mineral oil saturated hydrocarbons (MOSH) and mineral oil aromatic hydrocarbons (MOAH). The occurrence and danger of mineral oil products in foods has been discussed in recent years. It is said that contamination derives from the printing inks applied directly to the packaging and/or from the ink used in newspapers, employed to produce recycled fiber. This article presents the GCxGC analysis of MOAH fractions of pasta.
When analyzing mineral oil, MOSH and MOAH fractions are separated, and then each component is quantified. The fractions separated with off-line SPE using an Ag silica-gel SPE cartridge contain the peaks in addition to the target components in the chromatogram. These peaks can include information on the source of contamination.
The figure below shows the GCxGC chromatogram of a MOAH fraction for pasta purchased in a supermarket. The series of peaks in the MOAH fraction were identified as esterified fatty acids. The tentatively identified peaks are listed in the table below. MOAH fractions were quantified to be 1.6mg/Kg (< C25) with GCxGC -FID; attention was paid, during integration, to eliminate the "unknown" peaks. The esterified fatty acids derived from the paperboard packaging. In fact, in a sample of pasta analyzed prior to box packaging, no sign of MOAH contamination was observed. 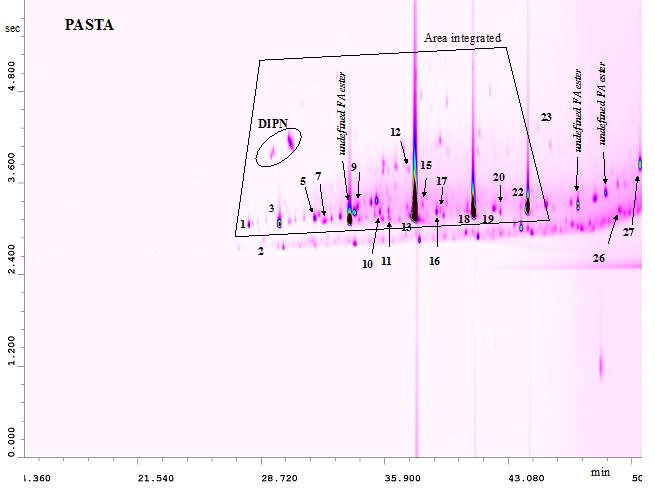 Shimadzu’s triple quadrupole GCMS-TQ8030 is capable of operating under high-speed conditions in both scan and MRM modes. Moreover, this instrument can generate simultaneous scan/MRM data, also in a rapid manner.
A GCxGC-MS/MS method was developed for simultaneous scan qualitative analysis of untargeted essential oil and MRM qual/quantitative analysis of target ones. SLB-5ms was used as the 1st column and IL-60 as the 2nd column.
The figure below is the scan GCxGC-MS/MS 2D chromatogram expansion for mandarin essential oil. The spectral matched 16 mono/sesquiterpenes are reported in the table. 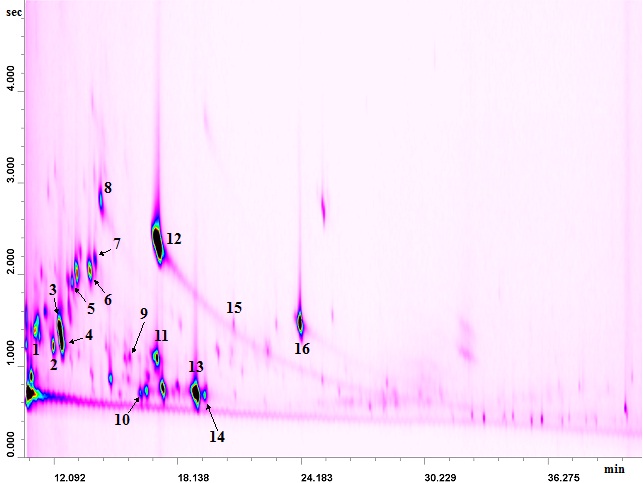 MRM quantitative analysis of three preservatives, such as o-phenyl phenol (OPP), butylated hydroxytoluene (BHT) and butylated hydroxyanisole (BHA), was performed. A calibration curve was constructed over the 0.1 ppm-100 ppm range for OPP, while another covered the 0.5 ppm-200 ppm range for BHA and BHT. The figure below is the MRM GCxGC-MS/MS 2D chromatogram at the 1ppm level. An average OPP concentration corresponding to 57.0 ppm was found and no trace of either BHT or BHA was found in this mandarin oil (LODs of BHT and BHA were 3ppb and 11ppb, respectively). GCxGC-MS/MS has the potential to chromatographically separate the overlapped MRM peaks even in conventional GC/MS/MS analysis.

A library search using the mass spectrum identified 241 of the over 1000 peaks detected. It is apparent that GC×GC is an effective means of analyzing complex samples.

Fats in foods are attracting attention due to their deep relationship to a series of diseases including hypertension, heart disease, obesity, and hypercholesterolemia. They have been widely researched using chromatography in recent years. However, conventional methods suffer from several problems: 1) inability to identify the double-bond position in fatty acid isomers due to the similarity of the mass spectra, 2) poor GC resolution, and 3) inability to detect trace peaks due to poor sensitivity. In this example,a high-resolution, high-sensitivity GC×GC method was applied to the determination of fatty acid methyl esters in human blood plasma.

It is apparent that the FAME peaks corresponding to the carbon number (C), double bond number (DB), and double bond position (ω) are regularly distributed on the 2D chromatogram. This spatial distribution arrangement is extremely effective for the identification of compounds. Of the 65 peaks, 29 could be identified based on this arrangement. (The peaks labeled (st) in the diagram result from standard samples.) In addition, low levels of fatty acids with odd carbon numbers were also detected.

The aroma of roasted coffee is characterized by the presence of several thousand types of volatile compounds, mainly belonging to the pyran, pyrazine, and pyrrole group. The olfactory sensitivity, concentration, and chemical characteristics differ from type to type and the mutual interactions between them determine the characteristic aroma of the coffee. We used GCGC-MS to analyze the volatile components in coffee beans that are hard to analyze by conventional GC due to their extremely complex compositions.

A polar-nonpolar column pair was used for this analysis. Several thousand peaks on the two-dimensional plane,and we obtained a good plot of the extremely complex coffee aroma.

2D Chromatogram of the Volatile Components in Arabica Coffee

It is apparent that 14 types from the pyrazine group form according to the side-chain carbon number and are aligned as horizontal bands.